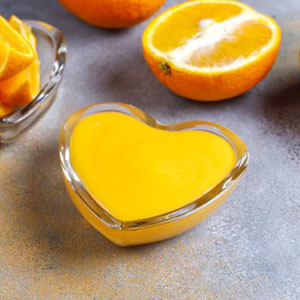 Take three large Seville oranges, the clearest kind you can get, grate off the out-rhine; take eight eggs, (leave out six of the whites) half a pound of double refined sugar, beat and put it to your eggs, then beat them both together for half an hour; take three ounces of sweet almonds blanched, beat them with a spoonful or two of fair water to keep them from oiling, half a pound of butter, melt it without water, and the juice of two oranges, then put in the rasping of oranges, and mix all together; lay a thin paste over your dish and bake it, but not in too hot an oven.

Take half a pound of candid orange, cut them in thin slices, and beat them in a marble mortar to a pulp; take six eggs, (leave out half of the whites) half a pound of butter, and the juice of one orange; mix them together, and sweeten it with fine powder sugar, then bake it with thin paste under it.

Take three or four Seville oranges, the clearest skins you can get, pare them very thin, boil the peel in a pretty quantity of water, shift them two or three times in the boiling to take out the bitter taste; when it is boiled you must beat it very fine in a marble mortar; take ten eggs, (leave out six of the whites) three quarters of a pound of loaf sugar, beat it and put it to your eggs, beat them together for half an hour, put to them half a pound of melted butter, and the juice of two or three oranges, as they are of goodness, mix all together, and bake it with a thin paste over your dish.

Take five or six Seville oranges, grate them and make a hole in the top, take out all the meat, and boil the skin very tender, shifting them in the boiling to take off the bitter taste; take half a round of long bisket, slice and scald them with a little cream, beat six eggs and put to your bisket; take half a pound of currants, wash them clean, grate in half a nutmeg, put in a little salt and a glass of sack, beat all together, then put it into your orange skin, tie them tight in a piece of fine cloth, every one separate; about three quarters of an hour will boil them: You must have a little white wine, butter and sugar for sauce.

Take two Seville oranges, the largest and cleanest you can get, grate off the outer skin with a clean grater; take eight eggs, (leave out two of the whites) half a pound of loaf sugar, beat it very fine, put it to your eggs, and beat them for an hour, put to them half a pound of clarified butter, and four ounces of almonds blanched, and heat them with a little rose-water; put in the juice of the oranges, but mind you don’t put in the pippins, and mix together; bake it with a thin paste over the bottom of the dish. It must be baked in a slow oven.

Pare and slice six sweet Florida oranges, removing the seeds and all the white skin and fibers. Place in the bottom of a glass dish. Make a custard by stirring two table spoonfuls of cornstarch braided with a little milk into a pint of boiling milk, and when thickened, adding gradually, stirring constantly meanwhile, one egg and the yolk of a second egg well beaten with one fourth cup of sugar. When partially cool, pour over the oranges. Whip the white of the second egg to a stiff froth with one fourth cup of sugar which has been flavored by rubbing over some orange peel, and meringue the top of the pudding. Fresh strawberries, raspberries, or peaches may be substituted for oranges in making this dessert, if preferred.

Take two large Seville oranges, and grate off the rind, as far as they are yellow; then put your oranges in fair water, and let them boil till they are tender; shift the water three or four times to take out the bitterness; when they are tender, cut them open, and take away the seeds and strings, and beat the other part in a mortar, with half a pound of sugar, till it’s a paste; then put in the yolks of six eggs, three or four spoonfuls of thick cream, half a Naples-biscuit grated; mix these together, and melt a pound of very good fresh butter, and stir it well in; when it’s cold, put a bit of fine puff-paste about the brim and bottom of your dish, and put it in and bake it about three quarters of an hour.

Take the outside rind of three Seville oranges, boil them in several waters till they are tender; then pound them in a mortar with three quarters of a pound of sugar; then blanch and beat half a pound of almonds very fine, with rose-water to keep them from oiling; then beat sixteen eggs, but six whites, and a pound of fresh butter; beat all these together very well till it’s light and hollow; then put it in a dish, with a sheet of puff-paste at the bottom, and bake it with tarts; scrape sugar on it, and serve it up hot.

Put sixteen yolks with half a pound butter melted, grate in the rinds of two Seville oranges, beat in half pound of fine Sugar, add two spoons orange water, two of rose-water, one gill of wine, half pint cream, two Naples biscuit or the crumbs of a fine loaf, or roll soaked in cream, mix all together, put it into rich puff-paste, which let be double round the edges of the dish; bake like a custard.

4 oranges, 1 pint of milk, 3 eggs, 1 tablespoonful of corn flour, sugar to taste. Peel and slice the oranges and remove the pips, place the fruit in a pie-dish, and sprinkle with sugar; boil the milk, and thicken it with the corn flour; let the milk cool, beat up the eggs, and add them carefully to the thickened milk, taking care not to do so while it is too hot; pour the custard over the fruit, and bake the pudding in a moderate oven until the custard is set. Serve hot or cold. 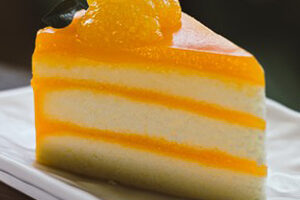 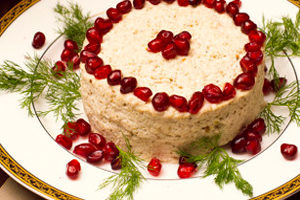 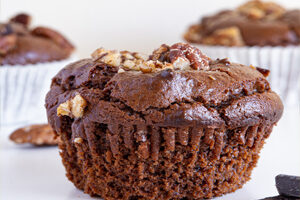