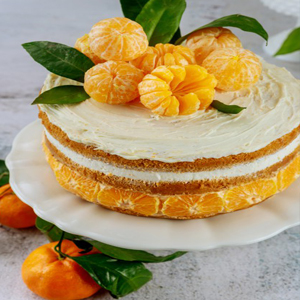 Take half a dozen Seville oranges, chip them very fine as you would do for preserving, make a little hole in the top, and scope out all the meat, as you would do an apple, you must boil them whilst they are tender, and shift them two or three times to take off the bitter taste; take six or eight apples, according as they are in bigness, pare and slice them, and put to them part of the pulp of your oranges, and pick out the strings and pippins, put to them half a pound of fine powder sugar, so boil it up over a slow fire, as you would do for puffs, and fill your oranges with it; they must be baked in a deep delft dish with no paste under them; when you put them into your dish put under them three quarters of a pound of fine powder sugar, put in as much water as will wet your sugar, and put your oranges with the open side uppermost; it will take about an hour and half baking in a slow oven; lie over them a light puff-paste; when you dish it up take off the lid, and turn the oranges in the pie, cut the lid in snippets, and set them at an equal distance, to serve it up.

Rub smooth a heaping tablespoonful of cornstarch in three tablespoonfuls of water; pour over it a cup of boiling water, and cook until clear, stirring frequently that no lumps form. Add one cupful of sour orange juice, a little grated rind, and the juice of one lemon, with two eggs. Bake with under crust only. Meringue the top when baked, with the whites of the eggs well beaten with a tablespoonful of sugar, and a very little grated orange peel sprinkled over it.

Grate the rind of one and use the juice of two large oranges. Stir together a large cupful of sugar and a heaping tablespoonful of flour; add to this the well-beaten yolks of three eggs, two tablespoonfuls of melted butter. Reserve the whites for frosting. Turn this into a pie-pan lined with pie paste and bake in a quick oven. When done so as to resemble a finely baked custard, spread on the top of it the beaten whites, which must be sweetened with two tablespoonfuls of sugar; spread evenly and return to the oven and brown slightly. 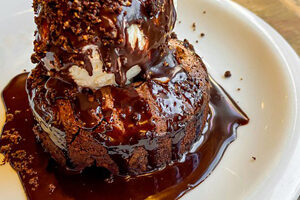 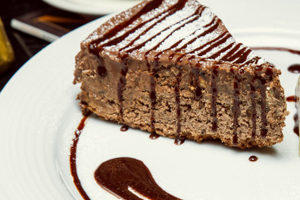